POW: PIcture of the Week 12 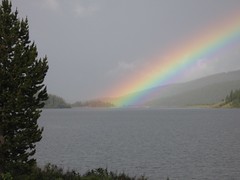 This week was the 20th anniversary of a campout that was started as a wedding anniversary present from one of my camp buddies to his wife, who is also a camp buddy.

It is a treat, blessing and honor that this group of friends (odd that we are) still get together every year and camp out. Since it was the 20th anniversary, we decided last year to go somewhere a bit different so out to the Rockies we went.

As we drove up to over 10,000 feet, it started raining. Bad news for camping..but, then as we got out of the cars, the sun came out and the most magnificent rainbow I have ever seen appeared and ended right by our campsite. Cool.