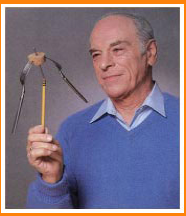 My heart is saddened to learn that Mr. Wizard died yesterday.

Of course, I grew up watching his show. It was a far cry from the edu-tainment we have today ala Bill Nye the Science Guy and Beakman (I love both of them, too). He was much more serious with his approach but it was still fun to do science “with” him. I sorta hoped I could be one of the kids on his shows..but I guess those shows were filmed when I was pretty young. I was just waxing poetic over the weekend about all of my science toys I had growing up (anybody else have the Johnny Horizon Environmental Test Kit ? Didn’t think so.)

As a young adult, I saw Mr. Wizard twice at different National Science Teachers Association conventions. He was gracious and willing to talk to you at his booth. (unlike Beakman and later on, the Science Guy – Bill Nye started out accessible but fame got the best of him). I have signed copies of a book or two of his.

Think I will have to go home tonight and mix baking soda and vinegar together in his honor.