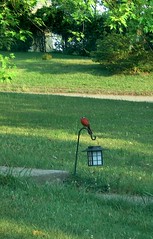 The cardinals in this area are “bald”. It is disturbing. We thought it was contaminated seed in our feeders but we saw the same thing on our bike ride last weekend so it appears to be a disease. This guy was hanging out on our lawn lights this morning. Maybe the lack of feathers up top is cooler in the summer?