I am a big fan (sucker?) for the end of the year summaries that abound at this time of year.
And, I love lists. So, here is a list of lists….

Presenting my faves for the end of 2009 and the end of the first decade of the 2000s (naughties? noughties? oughts? aughts? What did we call them?)

Lifehacker’s Most Popular Hive Five Topics of 2009
Crowdsourcing has grown in popularity, easy and usefulness. And why not? It usually works!

Entertainment Weekly’s Best of 2009 (highs and lows)
Since this is my guilty pleasure reading at the gym, I felt that I must put it in here

The Top 10 Everything of 2009  and the Best Movies, TV, Books and Theater of the Decade from Time Magazine
well, they said everything…

Top 10 Internet Moments of the Decade from ABC News

And, for good measure, I just had to use the “My Year in Status” application in Facebook to build a status collage for 2009. 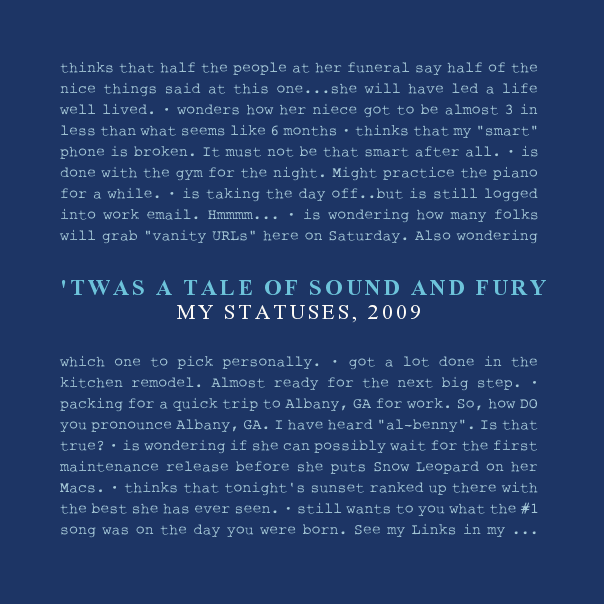 I also had to go visit Wordle and do something there with my blog posts from 2009. And, here it is.