Do you hug your technology? 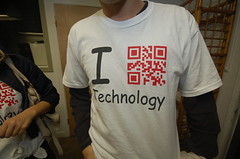 Driving home yesterday, I heard a story on NPR about the last mission to the Hubble Space Telescope. This mission is the last repair mission (and the first one in seven year, it seems) and the story told a bit about the repairs and how it will help the mighty instrument be even more “mightier”.

But what struck me the most was the part of the story about the astronauts also taking the feelings of the engineers and scientists with them on this last visit. The science team with Hubble have been working on it for decades. This last mission has to be a hard one to take – even though it was once cancelled completely.

The part of the story that stayed with me:

He notes that every astronaut who goes to Hubble leaves a mark on the observatory. “Even just putting your hand on the telescope affects the surface coating juts a little bit,” he says, “and so you can see handprints and things like that, and so it’s clear that people have been working on this telescope.”

Another astronaut who will do spacewalks and repair work on this mission, Mike Massimino, says he recently saw a good friend who has worked on the Hubble project for a long time. “He said, ‘Make sure, your last time on that telescope, you give it a pat for me,’ ” Massimino says.

So, he will give Hubble a special goodbye pat on behalf of all the people who have worked with it. “I hope that that’s going to be in my mind as I’m letting go of the telescope for the last time, my one last handshake with it,” Massimino says.

I do like having a connection with the techonlogy I use. The admins snickered at me but when I was finally allowed into the server room at school so I could see the electronic “box” where all of my online courses lived, it felt good to see it physically. Made it more real, I guess.

I recalled how I feel when I get or let go of a piece of technology. Especially something that I have used and loved for a long time (harder to do now, it seems, with the disposable nature of much of our tech)… Don’t have it yet with cell phones but I certainly loved my Mac SE (and my PowerMac 6100 and my PowerComputing clone and..well, you get the idea – don’t even get me started on my iMac!). I love my record player and my records. I have been digitizing cassettes for a year now and it is still so hard to put those cassettes into the trash or recycling bin..even though I have the music from them safely esconsced in electrons on two hard drives. Americans LOVE their cars..that qualifies. Chefs love their knives. I’m sure the list goes on.

What tech makes you feel?

1 thought on “Do you hug your technology?”